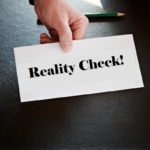 The term “growing” immediately tells me that it’s a process and not an event.  If I let my mind wander around that concept for a while I start to realise that the greater the vision/end product, the longer the process is likely to be. There are no short cuts.

Some years ago, I was a member of a small MBO (management Buy-Out) team which, with the assistance of an investment bank, acquired an ailing business. We thought that we had done our homework, figured that the business had potential, and that we would conservatively turn that business around to profitability in 5 years.

Well… it was 12 years later when we finally disposed of that asset. Was it worth it? Absolutely! But there were times, many times – perhaps too many times, that we thought (but didn’t often express it aloud), “What have we got ourselves into?”

We weren’t dummies and we weren’t in this for the sole benefit of some anonymous or faceless investors. We were them!  We were the key shareholders. Each was highly competent and experienced in his area of expertise: management, finance, marketing, HR, manufacturing, distribution, and sales.

It wasn’t the breakdown or failure of policies, systems, or processes within the scope of our expertise and control that torpedoed our plan; it was those things and situations over which we had no control that were the culprits. While our overall business goals and plans were sound, dealing effectively with the unexpected was the real challenge. Sometimes it felt as though “Black Swans” were arriving in flocks.

Hundreds of millions of Rands and thousands of jobs were at stake. The team was under extreme pressure to do the right things and do things right- first time every time. We had to develop flexibility and agility at a strategic level which gave a whole new meaning to the concept and practice of strategic (risk) management and of how teams actually work under pressure (Not what they tell you in the classroom).

It was one thing having learned the theory but in practice it somehow seemed that that theory became a “once upon a time” fairy tale- unreal and far removed from the gut- wrenching fear, tensions, stresses and frustrations that made up the reality.

There were times when situations and events needed immediate on-the-spot answers or solutions, which gave one little or no time to calmly think through lists of options. Similarly, this wasn’t the worn-out textbook example of knee-jerk reaction to crises management! This was the harsh reality of how business actually works and there wasn’t always an immediate answer on hand. Sometimes there was no answer whatsoever let alone a “textbook solution”.

It exposed one’s own inadequacies and flaws and it wasn’t a great feeling at all.

Somehow we managed and lived to tell a tale of success and a sense of personal achievement. I kick myself for not having written an account of my day-to-day experiences in the form of “A Diary of a Turnaround Business Owner”. In any event, I think that I was just too exhausted at the end of each day. Growing a Business Great is not for the faint-hearted but… it is really exciting and rewarding.